He is the recipient of many special honors, including the Presidential Medal for Freedom in 1969; the Robert H. Goddard Memorial Trophy in 1970; the Robert J. Collier Trophy in 1969; and the Congressional Space Medal of Honor, 1978.

From 1949 to 1952, he served as a naval aviator; he flew 78 combat missions during the Korean War. During 1971-1979, Armstrong was professor of aerospace engineering at the University of Cincinnati, where he was involved in both teaching and research. Currently serves as Chairman, AIL Systems, Inc. Deer Park, N.Y.

Armstrong joined NACA, (National Advisory Committee for Aeronautics), NASA's predecessor, as a research pilot at the Lewis Laboratory in Cleveland and later transferred to the NACA High Speed Flight Station at Edwards AFB, California. He was a project pilot on many pioneering high-speed aircraft, including the 4,000 mph X-15. He has flown over 200 different models of aircraft, including jets, rockets, helicopters and gliders.

In 1962, Armstrong was transferred to astronaut status. He served as command pilot for the Gemini 8 mission, launched March 16, 1966, and performed the first successful docking of two vehicles in space.

Armstrong subsequently held the position of Deputy Association Administrator for Aeronautics, NASA Headquarters Office of Advanced Research and Technology, from 1970 to 1971. He resigned from NASA in 1971.

Neil Armstrong, the first man to walk on the Moon, took a scrap of Armstrong "tartan" with him on his historic space flight of 1969, in tribute to his Border forbears, who would have gone a-reiving by the light of that very moon on which he left the first footprints (Scotsman, Sept. 2001).

"That's one small step for a man, one giant leap for mankind." 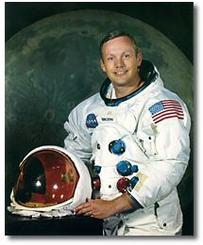