The Scots-Irish or Ulster Scots

Short History of the Scots in Ireland and the USA

Scotch-Irish Society of the USA

I can relate to this poem, being raised "Irish"

And when the boys, they come along,
Ah, sure, they did beguile
For each of them was surely blessed
With a splendid Irish smile.

And proud we were of Irish blood
As pure as shamrock green,
As sturdy as Irish family
As ever could be seen.

And then we joined the Mormon Church-
Ah, surely that was grand!
And with true Irish vigor
We answered each demand.

We kept the Word of Wisdom;
We paid our tithing too.
We all did every little thing'That we were asked to do.

We did our genealogy
There, duty was all fun.
With joyful pride we studied hard
About each Irish son.

we wrote it on the family chart
(We wrote it all in green):
Each Irish name we added on,
Each fellow, each colleen.

And then there came that frightful day
The shock we had to bear!
Father came home looking pale,
We gathered "round his chair.

My brothers' splendid Irish smiles
soon faded all away,
And all our Irish tongues were stilled,
For there was naught to say

This thing our father told us-
Believe it?  We could not!
For in our Irish line he found
Great-grandpa was a Scot!

Going south on I-81, the mountains are beautiful—smoky from the haze that the sun makes when it burns into the pine. You may see cars and Burger Kings on that highway, but I am watching my own ghosts: tough, resilient women on buckboard wagons, hard men with rifles walking alongside, and kids tending cattle as they make their way down the mud trail called The Wilderness Road.

It is here in the Appalachian Mountains that my people, the Scots-Irish, settled after leaving Ireland and the north of Britain in the 18th century. They tamed the wilderness, building simple log cabins and scraping corn patches in thin soil. And they pressed onward, creating a way of life that many would come to call, if not American, certainly the defining fabric of the South and the Midwest, as well as the core character of the nation’s working class.

I am determined to reclaim the dignity of these people—for themselves and for America. It’s long overdue.

Off the highway in Virginia, I follow narrow winding roads past small frame houses, finally stopping at the entrance to Alley Hollow. My great-great-grandparents are buried back here, in a rough patch of woods on top of a nearby mountain.

Like many others, these ancestors have only rocks for headstones. I worry that, when my generation dies, their heritage will be lost just as completely—buried under the avalanche of stories that have on occasion ridiculed my people and trivialized their journey.

They came with nothing, and, for a complicated set of reasons, many of them still have nothing. Slurs stick to me, standing on these graves.

These people are too often misconstrued and ignored when America’s history is told. They did great things. And, in truth, the Scots-Irish (sometimes also called the Scotch-Irish) are a force that still shapes our culture.

Their Gifts To America

The Scots-Irish brought with them a strong, bottom-up individualism, largely inventing America’s unique populist-style democracy. They gave us at least a dozen Presidents, beginning with Andrew Jackson and including Chester A. Arthur, Ulysses S. Grant, Theodore Roosevelt (through his mother), Woodrow Wilson, Ronald Reagan (again, through his mother) and, most recently, Bill Clinton.

I worry that, when my generation dies, the heritage of a people now often ignored will be lost completely.

Their unique soldierly traditions formed the backbone of the country’s military, particularly in the Army and Marine Corps. In the Civil War, they formed the bulk of the Confederate Army and a good part of the Union Army as well, and in later wars they provided many of our greatest generals and soldiers.

Stonewall Jackson comes to mind, as do Grant, George S. Patton, and a slew of Army chiefs of staff and Marine Corps commandants. Not to mention Sgt. Alvin York, the hero of World War I; Audie Murphy, the most decorated soldier of World War II; and David Hackworth, one of America’s most decorated veterans of Korea and Vietnam.

The intense competitiveness that makes them good soldiers also has produced a legion of memorable athletes, business leaders and even such completely American pastimes as NASCAR racing, which evolved from the exploits of the daring moonshine runners of the Appalachian Mountains during Prohibition.

They created and still dominate country music—which, along with jazz and soul, is one of the truly American musical forms. They gave us so many brilliant writers—Mark Twain the lion among them, Horace Greeley, Edgar Allan Poe and Margaret Mitchell not far behind, and Larry McMurtry a good honorable mention—that their style of folklore became one of the truest American art forms. And they brought us a horde of thespians, including Tallulah Bankhead, Ava Gardner, Jimmy Stewart, John Wayne, Robert Redford and George C. Scott.

A Culture Of Contrasts

The traditional Scots-Irish culture, like America itself, is a study in wild contrasts. These are an intensely religious people—indeed, they comprise the very heart of the Christian evangelical movement—and yet they are also unapologetically and even devilishly hedonistic.

They are probably the most anti-authoritarian culture in America, conditioned from birth to resist. (It is interesting that Rosa Parks, whose refusal to move to the back of the bus sparked the modern Civil Rights movement, speaks of her Scots-Irish great-grandfather.) And yet they are known as the most intensely patriotic segment of the country as well.

They created a way of life that many would come
to call, if not American, the core character
of the nation’s working class.

They are naturally rebellious, often impossible to control, and yet their strong military tradition produces generation after generation of perhaps the finest soldiers the world has ever seen.

They are filled with wanderlust, but no matter how far they roam, their passion for family travels with them. Underlying these seeming contradictions is a strong unwritten code of personal honor and individual accountability.

Because “sophisticated” America tends to avert its eyes from them, it is inclined to ignore or misunderstand this culture. The Scots-Irish tradition of disregarding formal education and mistrusting, even despising, any form of aristocracy has given us the man the elites love to hate—the unreconstructed redneck. The Southern redneck is an easy target, with his intrinsic stubbornness, his capacity for violence and his curious social ways.

His legacy is stained because he became the dominant culture in the South, whose economic system was based on slavery. No matter that the English aristocrats of Tidewater were slavery’s originators and principal beneficiaries or that the typical Scots-Irish yeoman had no slaves.

His is a culture founded on guns. He considers the Second Amendment sacrosanct. Literary and academic America sees such views as not only archaic but also threatening.

The things he’s known for aren’t exactly valued in America’s centers of power. He’s always been a loyal American, sometimes to the point of mawkishness. He shows up for our wars. He hauls our goods, grows our food, sweats in our factories.

My culture needs to reclaim itself—not let others define, mock and use it.

In the classic film Cool Hand Luke, the warden of a Southern work camp was fond of saying to the irascible title character, “Luke, we got to get your mind right.” But the warden never got Luke’s mind right. He put Luke in solitary. He put him in chains to keep him from running away. But Luke kept running, kept resisting, because he would rather die than have the warden make his mind right.

Luke was nothing more than an unpretentious, unreconstructed, unre-educated redneck. And America is a much stronger country for all his stubbornness, his willingness to stay true to himself and his refusal to back down in the face of pressure from above.

A Time for Rediscovery

The Scots-Irish are a fiercely independent, individualist people. It goes against their grain to think collectively. But, as America rushes forward into yet another redefinition of itself, the contributions of the Scots-Irish are too great to remain invisible. My culture needs to reclaim itself—stop letting others define, mock and even use it—and in so doing to regain its power to shape the direction of America.

Because our country needs us.

We are the molten core at the very center of its unbridled, raw, rebellious spirit. We helped build this nation from the bottom up. We face the world on our feet and not on our knees. We were born fighting. And if the cause is right, we will never retreat.

Who Are The Scots-Irish?
In the decades leading up to the American Revolution, as many as 400,000 immigrants left Ireland, Scotland and northern England for America. While some were Irish and some English, the majority were Scottish Protestants, mostly from Northern Ireland, where they had grown weary of the conflict between the Anglican English and Irish Catholics.

Variously known as the Ulster Scots, the Scots-Irish and the Scotch-Irish, they traveled in family groups rather than as individuals and settled together on America’s frontiers, where, because of interlocking family networks, their folkways became dominant. One group settled in New Hampshire, spreading out into Vermont and Maine, but the overwhelming majority— more than 95 percent—settled along the Appalachian Mountains from Pennsylvania down to north Georgia and Alabama.

From there they migrated westward, forming the backbone of the rural South and Midwest, and then into settlements in Texas, Colorado and the Pacific Coast. They also moved north into the industrial areas of Michigan, Illinois, Ohio and Indiana.

It is estimated that there are more than 27 million descendants of the Scots-Irish migration now living in the U.S. Because people from this culture also identify themselves as of Scottish, English or Irish descent, the actual number is probably much higher.

Why You Need To Know The Scots-Irish

James Webb (by permission of the author)
Published: October 3, 2004 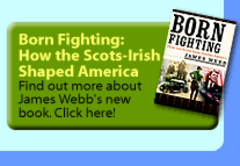 Another tribute to the Scots of Ulster, as well as the Scots of Scotland, is from the address given by the late Ambassador Whitelaw Reid before the Edinburgh Philosophical Institution of "The Scot and Ulster Scot in America."

Ambassador Reid inferred in this address that these two branches of Scots "deserve more credit for the making of America than any other race of people - that there would have been no United States without them."

This unusual term refers to those Presbyterian Scots who settled in Ulster (modern-day Northern Ireland) during the seventeenth century. From these 200,000 original settlers, many are still in Ulster but up to 2 million of their descendants eventually reached North America. Today they number an estimated 27.2 million

"the descendants of a group of people who refused to be held hostage under the tyrants boots either monetarily or religiously. A group of people who endured many hardships and much suffering to bring us to where we are today, and in so doing built for themselves a new home and for their descendants a new nation. Even in Northern Ireland we still survive and resist, We are....... very proudly........ Scotch Irish. (from the Scotch-Irish.net)